The V-1, also know as the Fieseler Fi-103, was not really a rocket. It was a jet powered cruise missile. It was the first of the "V" weapons. The "V" stood for "Vergeltungswaffen", roughly meaning "weapons of vengeance" or "weapons of retaliation". Because of the distinctive sound produced by the V-1, the Allies gave it the nickname of "buzz bomb".

The specifications for the V-1 are difficult to determine with any accuracy. The issue becomes clouded because both the United States and Russia later produced their own versions of the V-1. In the United States, the weapon was referred to as the JB-2 ("jet bomb"). Here are the specs as best as we have been able to determine.

This was designed as a manned version of the V-1. It was similar to the Japanese kamikaze concept in that it was not intended to be recovered. The V-1e was about 27 feet long and included a cockpit and instrumentation. It was flown several times by German test pilot Hanna Reitsch. Fortunately, it was never deployed. 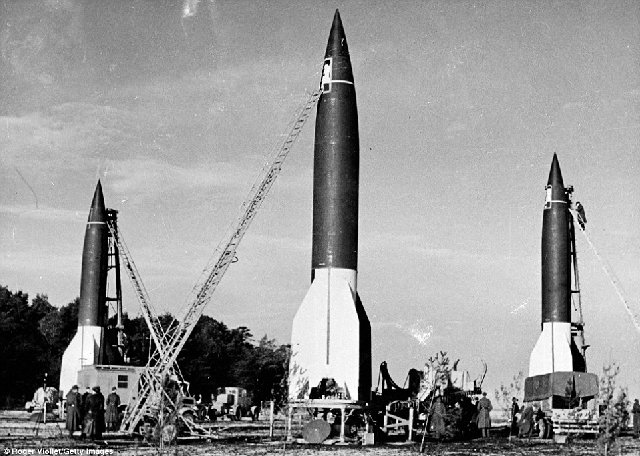 The V-2 was developed under the designation of A-4. Basic design and wind tunnel testing for the V-2 was done in 1936 and 1937. Some components were in production and an early test version (A-5) launched by 1939. Supervised by Wernher von Braun, the first V-2's were ready for launch in the spring of 1942.

The first launch occurred on June 13, 1942. The rocket went out of control and crashed. A second launch on August 16, 1942 also crashed, but not before being the first guided missile to exceed the speed of sound. The third launch on October 3, 1942, was a complete success reaching an altitude of 50 miles and a range of 120 miles.

Research continued at Peenemunde, but production was removed to Mittelwerk after an Allied bombing of Peenemunde on August 17, 1943.

The first use of the V-2 in war was on September 6, 1944, when two missiles were launched toward Paris. No damage was incurred. Attacks on England began on September 8, 1944, and continued until March 27, 1945.

This was a winged version of the V-2. The wings were intended to increase the glide time (and hence, the range) of the V-2. Two prototypes were launched, the second becoming the first winged vehicle to exceed the speed of sound on January 24, 1945. Work on the A-4b served as a cover for work on the A-9, which was prohibited after 1943. The A-4b missiles never went into production.

This vehicle was never built. It would have been the same as the V-2 except the fuel would have been nitric-sulfuric acid as an oxidizer and vinyl isobutyl ether mixed with aniline as the fuel. These were storable liquids and would have made the V-2 faster and easier to launch.

A-7: Winged missile based upon the A-5 prototype. This was intended as a research vehicle only

A-9: Similar in concept to the A-4b. Because of the limited guidance capabilities at the time, the A-9 would have been piloted. One version involved swept wings to provide for better supersonic lift when used as the second stage of the A9/A10. The final phase of flight would have been as a glider (to increase range). In this mode, it would have been slower and easier to intercept and thus was never built or tested.

Antipodal Bomber: A rail launched bomber with an engine capable of 220,000 pounds of thrust and skipping along on the atmosphere as a stone skips on the surface of a pond. The Antipodal Bomber could have delivered a 12,000 payload from Germany to New York in about 80 minutes.