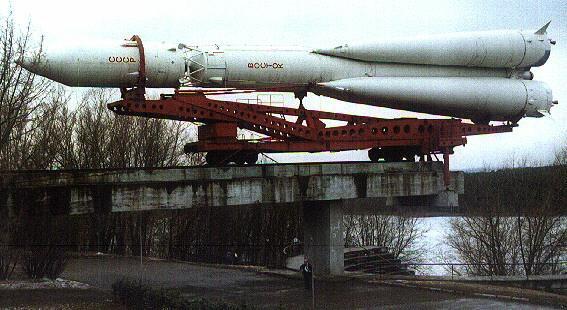 The R-7 missile was developed as the Soviet Union's first ICBM. It was, in fact, the first ICBM in the world. Its usefulness as a weapons platform was somewhat short lived, but the R-7 has evolved into superbly useful launch vehicle. The R-7 and its derivatives have launched Sputnik (the world's first satellite), all the Vostok, Voskhod, and Soyuz manned missions, Progress cargo missions, commercial satellites, biological research satellites, observation satellites, and more.

A Soviet governmental order on 13 February 1953 called for a two-stage intercontinental ballistic missile with a range of 7000-8000 km and nose cone plus payload (warhead) capacity of 3 tons. Shortly after initial testing in October 1953, the design was modified and called for a payload capacity of 3 tons and a launch weight increase from 170 tons to 280 tons.

A ministerial decree on 2 July 1958 called for an upgraded R-7, the R-7A (8K74). This variation had more powerful engines, a lighter warhead, and increased propellant mass which increased the range up to 12,000 km. The R-7A went on active alert in early 1960. Normal reaction time under normal conditions was about 10 hours, and hold time (because of the cryogenic oxidizer) was about 1 hour. By mid-1968, the R-7A had been phased out of operational inventory and is now used exclusively for space applications.

NOTE: The R-7 is also referred to as the SS-6 by the United States Defense Intelligence Agency, and as Sapwood by NATO.