The Space Transportation System (STS), commonly referred to as the space shuttle, is actually comprised of four primary components. These components are: the external tank, the solid rocket boosters, the orbiter itself, and the space shuttle main engines. 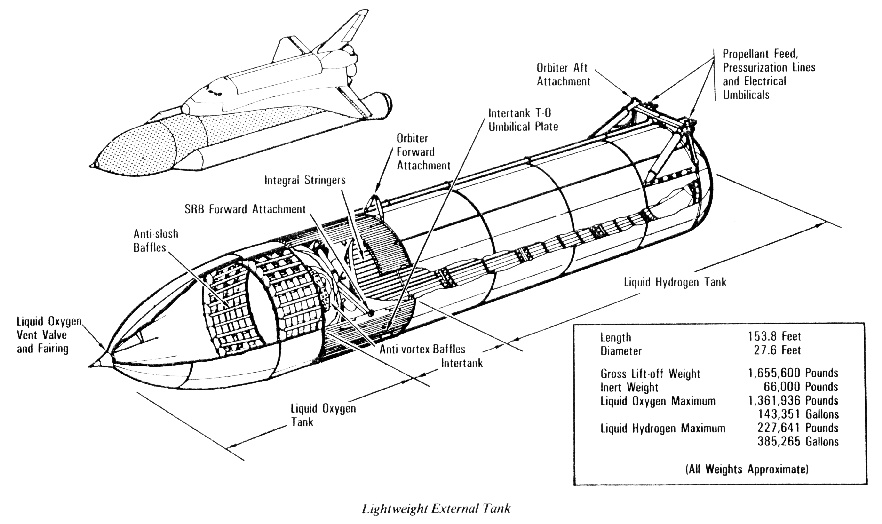 The external tank itself has three major components: the forward liquid oxygen tank, the intertank (holding most of the electronics), and the aft liquid hydrogen tank.

The LO2 tank holds 143,000 gallons (540,000 liters) of liquid oxygen. The tank feeds a 17 inch diameter feed line that carries liquid oxygen through the intertank, then outside the external tank to the aft right external tank/orbiter disconnect umbilical.

The LH2 tank holds 383,000 gallons (1.5 million liters) of liquid hydrogen. It has a 17 inch feed line that carries liquid hydrogen to the aft left umbilical.

The outside of the external tank is coated with a sprayed-on foam insulation, which averages about one inch in thickness. At the beginning of the shuttle program, the external tanks were painted white. If was found that by leaving the tanks unpainted, approximately 600 pounds of weight could be saved. The tanks have been unpainted since STS-3.

The external tanks are the only part of the space transportation system which cannot be reused. They break apart and burn up in the atmosphere during reentry. 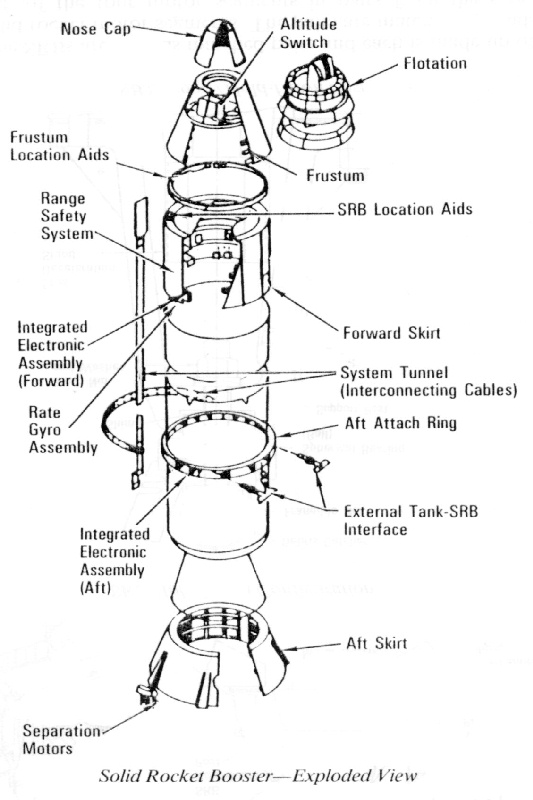 Each booster provides approximately 3.3 million pounds of thrust at launch.

The solid rocket boosters are designed to be reused. A parachute drops the booster into the water at a velocity of about 81 feet per second. Because the booster hits the water nozzle first, air is trapped inside and allows the assembly to float in the water. The nozzle is then plugged, which allows for the booster to be towed back for reuse. (Watch the slideshow). 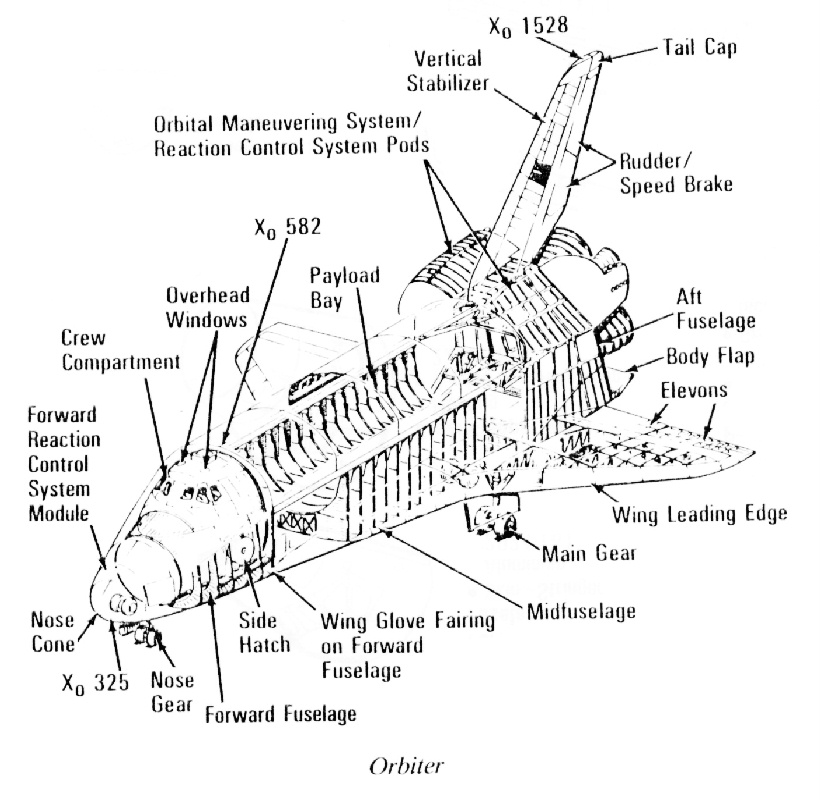 The orbiter structure is divided into nine major sections.

Crew compartment: This three level pressurized compartment has a side hatch, a hatch into the airlock, and another hatch from the airlock into the payload bay. There are six forward windshields, two overhead windows, two aft viewing windows, and a window in the side hatch. These are all pressure redundant. The two aft viewing windows each are constructed of two panes. All the other windows consist of three panes. Shades are provided for all windows to reduce or eliminate glare.

Volume of the crew compartment (with airlock) is 2,325 cubic feet.

The uppermost compartment of the cabin is the flight deck. This is where the commander and pilot sit. Two mission specialist seats are behind those.

Below the middeck is space for air and water tanks. Major components of waste management and air revitalization systems resides here. There is also space for crew equipment storage.

The airlock is located on the middeck. Depending on the mission, it can be moved to the payload bay. Usually, two space suits and life support systems needed for work outside the cabin. The airlock is large enough to accommodate two fully suited crew members.

Wing: The wing provides conventional aerodynamic lift and control for the orbiter. The main landing gears and gear doors are contained within the intermediate sections. The forward section blends the body of the orbiter into the wing leading edges. The elevons provide flight control to the orbiter during atmospheric flight.

Contractor for the wind is Grumman Corporation, Bethpage, NY.

Payload bay doors: The port and starboard doors are each 60 feet (18.2 m) long. The doors are opened shortly after orbit is achieved to allow exposure of the environmental and life support radiators.

Orbital maneuvering system/reaction control system (OMS/RCS): There are two pods attached, one each to the left and right sides of the upper portion of the aft fuselage. The OMS provides thrust for orbit insertion, orbit transfer, rendezvous, deorbit, and orbit aborts. The RCS is used to null residual motion left from OMS use. In other words, it is used to fine-tune the shuttle position.

Vertical tail: The vertical tail provides control during atmospheric flight. It has a structural fin surface and a rudder which splits in two to serve as a speed brake.

Contractor for the vertical tail is Fairchild Republic, Farmingdale, NY.

The three space shuttle main engines burn a liquid oxygen/liquid hydrogen mix fed to them from the external fuel tank. Each engine can produce 375,000 lbs (179,097 kg) of thrust at sea level. The engines can be throttled  between 65 percent and 109 percent. Higher thrust is used during launch and initial ascent. The engines are throttled back during final ascent to limit acceleration to 3 g's. 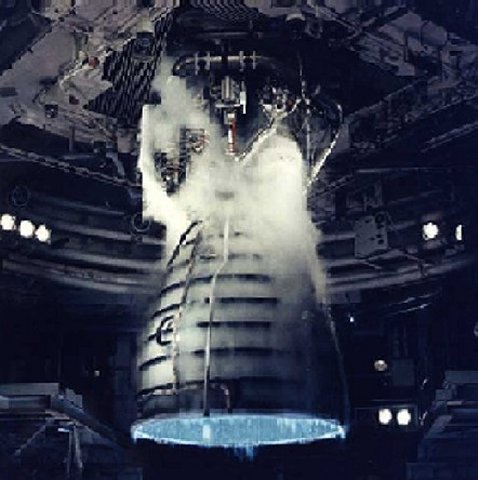 More information can be obtained on the STS Overview page and the shuttle orbiter page.