The HTV is an umanned cargo spacecraft which is used to deliver supplies to the International Space Station. A unique feature of the HTV is that it carries both pressurized and unpressurized cargo. 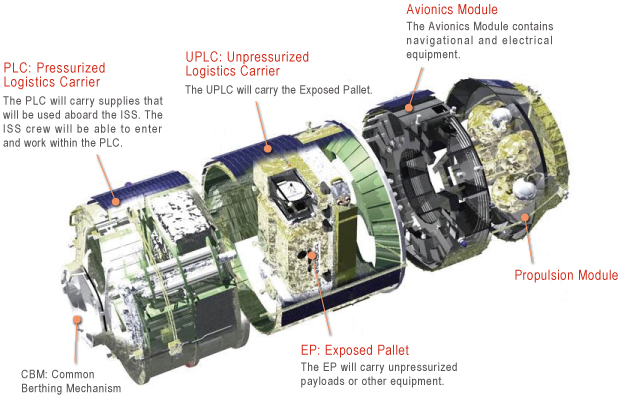 The HTV is launched with an H-IIB rocket. After launch, it is controlled from the ground for about 3 days as it makes its approach to the ISS. Once it is within range of the ISS (about 23 km), control shifts to the ISS. Once the HTV has closed to about 10 meters of the ISS, its thrusters are shut down and the HTV is grappled by the station's Canadarm2 and berthed to the Harmony Node 2.

While docked with the ISS, hatches are opened to allow free access to the pressurized module. The Canadarm2 is used to unload the unpressurized module. After all supplies have been unloaded from the HTV, it will be loaded with waste from the space station. It is then undocked and deorbited over the South Pacific where it will be destroyed upon reentry to the atmosphere.

The H-IIB, is an upgraded version of the H-IIA launch vehicle currently in use by Japan.