Quoting from NASA, "The mission of the International Space Station is to enable long-term exploration of space and provide benefits to the people on Earth."

This is being accomplished by building a permanent orbiting platform on which research can be conducted in a near gravity-free environment.  The types of activity performed on the ISS include, but not be limited to, medical research, life sciences research, and research and development of materials. 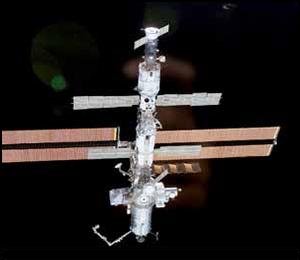 The ISS doesn't have an official name. When it was first proposed during the Reagan years, it was a strictly American space station with a tentative name of "Freedom".  As the early stages of partnering began, the proposed name was changed to "Alpha". That name was also dropped as Russia assumed a greater role in funding and design.

On 2 November 2000 the first crew was given permission to use the name "Alpha" when referring to the International Space Station. This permission was given with great reluctance. Alpha indicates first, but the Russian station Mir was around years before the ISS, and the Russian Salyut stations were around before that. Then of course there was the American Skylab. The name "Alpha" never really took, so the station is commonly referred to simply as "The International Space Station" or "ISS".

(If the station WERE to have an official name, we propose calling it the "ISS Yuri Gagarin". After all, it IS the first INTERNATIONAL space station and Yuri Gagarin WAS the first person into space.)

Other resources:
NASA's International Space Station page.
Find astronaut and cosmonaut nationalities, date and place of birth, flights, and EVA's on these pages dedicated to the Astronauts & Cosmonauts.