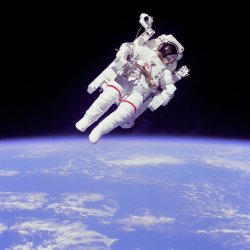 Who is currently in space?

This section of the World Space Flight family is dedicated to short biographies and flight records of all the astronauts and cosmonauts. The pages organized alphabetically and by nationality are restricted to those individuals who have either actually flown in space, or died during training or on missions. The astronaut and cosmonaut group pages include individuals who have trained but left the programs before actually having flown (or are still awaiting their first flight). There are some individuals who were never formally part of a group (space tourist Dennis Tito, for example) and will not be represented in the group pages.

The basic records are complete for people who have flown. This includes name, birth date, birth place, nationality, and the sequential listing of flights including dates and duration. In instances where an individual does not return on the same flight which took him/her into space, the upload flight is listed first, followed by the down load flight.

Features on this site:

Who/How many people are currently in space?

US Astronaut Hall of Fame Inductees

Who Is ...? A short international guide to space pioneers.