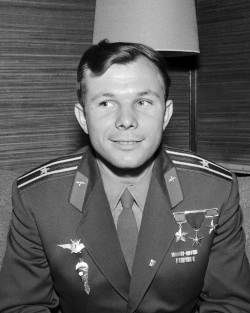 Yuri Gagarin was the first man into space. Following his first heroic flight into space, Soviet officials valued him more for his propaganda and political usefulness than as a pioneering cosmonaut. They wanted him alive and feared losing him to an accident in space. Yuri, however, wanted to fly. After several years of struggle, he was returned to flight status. It was during his training as a backup for Soyuz 1 that Gagarin tragically died.