Problems with the tests of the Soyuz capsule indicated that the craft was not yet ready for manned flight. Political pressures led to the flight taking place over the objections of the engineers.

Soyuz experienced problems from the beginning. One of the solar panels failed to deploy and the maneuvering thrusters did not work properly. The problems with orientation led to the decision to bring Komarov home, but there were also problems firing the retrorockets. During reentry, the spinning of the capsule tangled the lines on the main chute. When the reserve parachute was deployed, it became entangled with the main chute which failed to release. Komarov was killed in the resulting crash.

Komarov's remains were interred in the wall at the Kremlin, but an incomplete search and clean-up of the crash site led to more of him being found and given a second burial.

The original intent of the mission was for Soyuz 2 to be launched the next day (24 April) with three cosmonauts (Yevgeni Khrunov, Aleksei Yeliseyev, and Valeri Bykovsky). Two of these cosmonauts (Khrunov and Yeliseyev) were to have spacewalked to Soyuz and returned with Komarov. 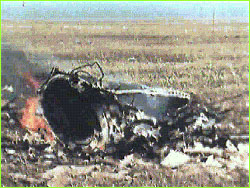 A memorial page to Vladimir Komarov and Soyuz.