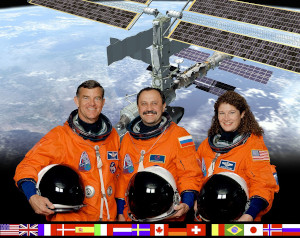 Actual station occupancy dates were staggered. Usachyov moved in 10 March, Voss moved in 12 March, and Helms moved in 14 March. The staggered dates allowed for a smooth transition from one crew to another.

Usachyov was the station's first Russian commander. Helms was the first woman occupant.

Objectives: The crew was the first to begin experiments on the station. Approximately 20% of their time was devoted to experiments.