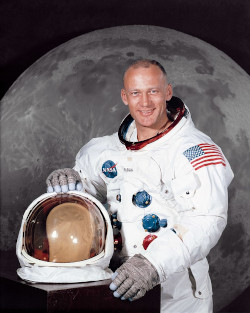 Buzz Aldrin was the second man on the moon. He was an Air Force pilot with degrees from the US Military Academy and the Massachusetts Institute of Technology.

Aldrin returned to active duty in 1971 as commander of the Test Pilots School at Edwards Air Force Base. He suffered emotional problems following his return from the lunar mission which caused him to retire from the Air Force in 1972. He is the author of three books, "Return to Earth", "Men From Earth", and the sci-fi "Encounter With Tiber".