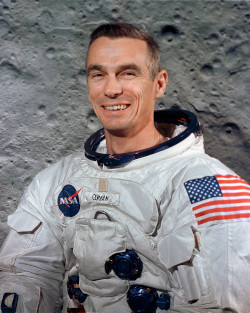 Originally, he was on the backup crew for Gemini IX. When the primary crew of Elliot See and Charles Bassett were killed, he and Thomas Stafford moved up to become the prime crew.

Cernan commanded Apollo 17 in the final manned lunar mission. He was not an active participant in the 17 December 1972 EVA.