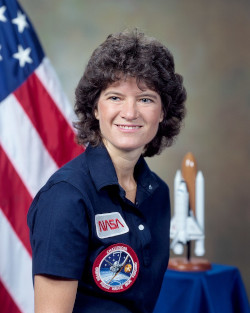 Sally Ride was the first American woman to go into space. At the time of the Challenger disaster, Sally was scheduled for a third trip into space aboard the 61-M mission (cancelled) in the summer of 1986. Sally resigned from NASA in August 1987 to join the staff at Stanford University. She left Stanford in June of 1989 to become head of the Space Science Institute at the University of California - San Diego.