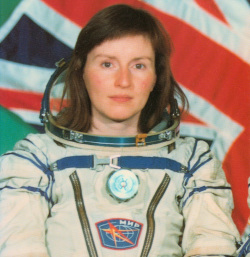 Helen Sharma was the first Briton in space. At the time of her selection, she was a chemist for the Mars candy company. During her trip into space, she conducted medical and Earth observation experiments for British scientists.

Her flight was privately funded by the British company, Antequera, Ltd. Her backup was Timothy Mace, a pilot with the Royal Air Force.