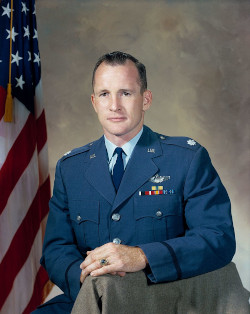 White performed the first American space walk during Gemini IV. He was a member of the Apollo 1 crew due to launch 21 February 1967. He died in a fire during rehearsal for the flight.

Ed White had been a test pilot for the USAF. He had degrees from the United States Military Academy and the University of Michigan.