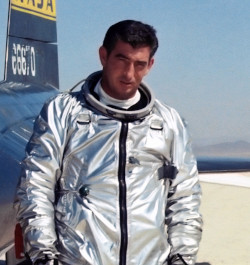 Adams died in the crash of flight #191, in which the aircraft was destroyed. After reaching peak altitude, Adams entered a spin at Mach 5. He entered dive at 30,000 m, began high frequency pitch oscillations reaching 15 G's. The aircraft was unable to endure the stress and disintegrated.