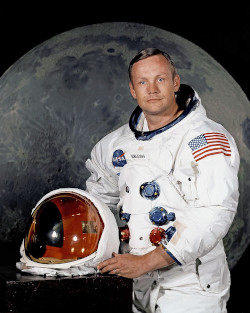 Armstrong was the first man to set foot on the moon, 20 July 1969. As he stepped onto the moon, Armstrong said, "That's one small step for man, one giant leap for mankind."

He was an Air Force pilot with degrees from Purdue University and the University of Southern California. Armstrong also had been an X-15 pilot, although none of his flights took him high enough to qualify for astronaut wings.