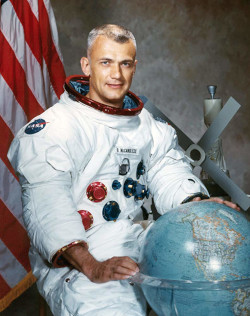 Bruce McCandless made the first untethered space walk on 7 February, 1984. He used a backpack powered by 24 nitrogen-firing jets and roamed up to 320 feet from the space shuttle while orbiting the Earth at 17,500 mph. Recalling Neil Armstrong's famous small step remark, McCandless said, "It's a heck of a big leap for me."