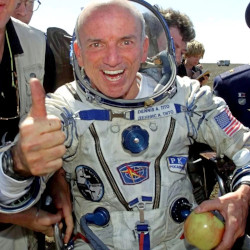 Dennis Tito, an American businessman, paid $20 million (US) to Russia to become the first space tourist. His reception aboard the International Space Station was cold as the United States and most other partners in the ISS felt his presence was a danger to the safety of the station and crew. There were no mishaps during his visit.