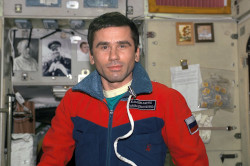 Malenchenko became the first person to get married while in space. He was on board the International Space Station while his bride, Yekaterina Dmitriyeva was in an auditorium at the Johnson Space Center in Houston, Texas.