This unmanned flight was a modification of ShenZhou 1 and flown to test the life support systems. A total of 64 experiments were carried on the flight (12 in the orbital module, 15 in the descent module (including a dog, a monkey, and a rabbit), and 37 in an add on package). Because of the lack of news or photos concerning the landing of ShenZhou 2, a landing failure is suspected. (It appears that a failure of a parachute connection led to a hard landing). Fate of the animals is unknown, but some of the cargo was reportedly burned in the landing. The orbital module reentered on 24 August 2001. 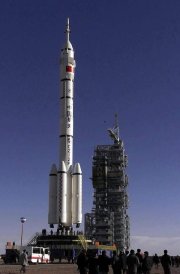