Sierra Nevada Corporation is a three-time winner of NASA awards with CCDev (US$ 20 million), CCDev2 (US$ 80 million) and CCiCap (US$ 212.5 million). In September 2014, Sierra Nevada missed out on any CCtCAP funding, but plan to continue Dream Chaser development on their own.

Sierra Nevada had partnered with NASA to develop Dream Chaser, a vehicle launched by an United Launch Alliance Atlas V and providing crew servicing for the International Space Station. Dream Chaser could also be used for civil customers needing orbital or suborbital transport.

The Dream Chaser is a fourth-generation design that draws from previous NASA work (1983-1992) on the HL-20 lifting body, which in turn was a reverse-engineered version of the BOR-4, a Soviet mini-shuttle. It is a reusable, pressurized piloted lifting body spacecraft which can carry a crew of seven and make a gentle (< 1.5 gs) runway landing. The craft uses non-toxic propulsion systems. The on-board propulsion system is derived from patented hybrid rock motors that SNC developed for Scaled Composites, Inc. on the SpaceShipOne and Virgin Galactic's SpaceShipTwo.

26 October 2013 marked the first free-flight approach and landing test for Dream Chaser. (Youtube video) The flight trajectory and landing went as planned except for a problem with the left landing gear, which resulted in a landing "anomaly".  (That is a nice way of saying it crashed on landing!) Flight testing begins in 2014. 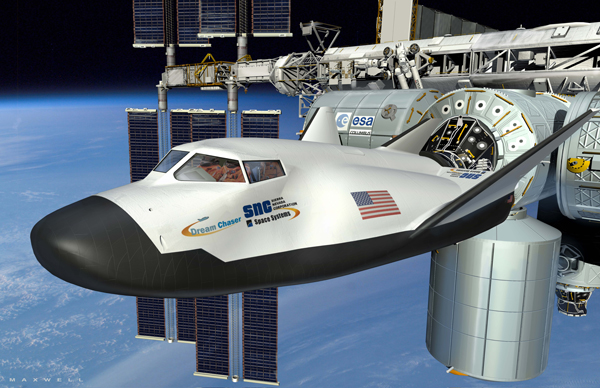 While Sierra Nevada was ultimately not selected for sending crewed missions to the space station, on 14 January 2016 it was announced they were contracted to send two unmanned versions of Dream Chaser (Dream Chaser Cargo System) on resupply missions to the International Space Station.