While waiting for rescue, the hatch on the capsule blew. Grissom escaped, but the capsule was lost. The hatch on Freedom 7 had been latch-operated. Liberty Bell 7 featured a new, and largely untested, explosive-activated hatch. The new hatch was supposed to improve the speed of astronaut exgress. Grissom would first have to remove pins from the hatch and a detonator cap. The helicopter would come in, sever the whip antenna, and connect to ring on top. As the capsule began to lift, the pressure on the ring (which served as the trigger) would cause the hatch to blow. It diden't work that way. Grissom claimed the hatch "just blew", but many believed he had panicked. NASA investigated and exonerated him.

The capsule was recovered in 1999. Although inconclusive (the hatch was not found), preliminary evidence tends to support Grissom's claim. Also supporting Grissom's claim was Walter Schirra of Sigma 7, who did have to manually blow the hatch. The plunger used required so much brute force that it took Schirra several tries and he injured his gloved hand doing so. Grissom had no indication of any such injury.

Launch vehicle was a Redstone rocket.

This is a very nice photo of the recovered Liberty Bell 7 during its display at the Kennedy Space Center.
(Credit to James Gerard. Used by permission. Check out his Field Guide to American Spacecraft.) 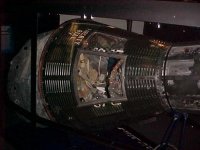 This is a NASA photo of the attempted recovery of the MR-4 capsule.

The Liberty Bell 7 capsule is currently on display at the Kansas Cosmosphere and Space Center, Hutchinson, KS.